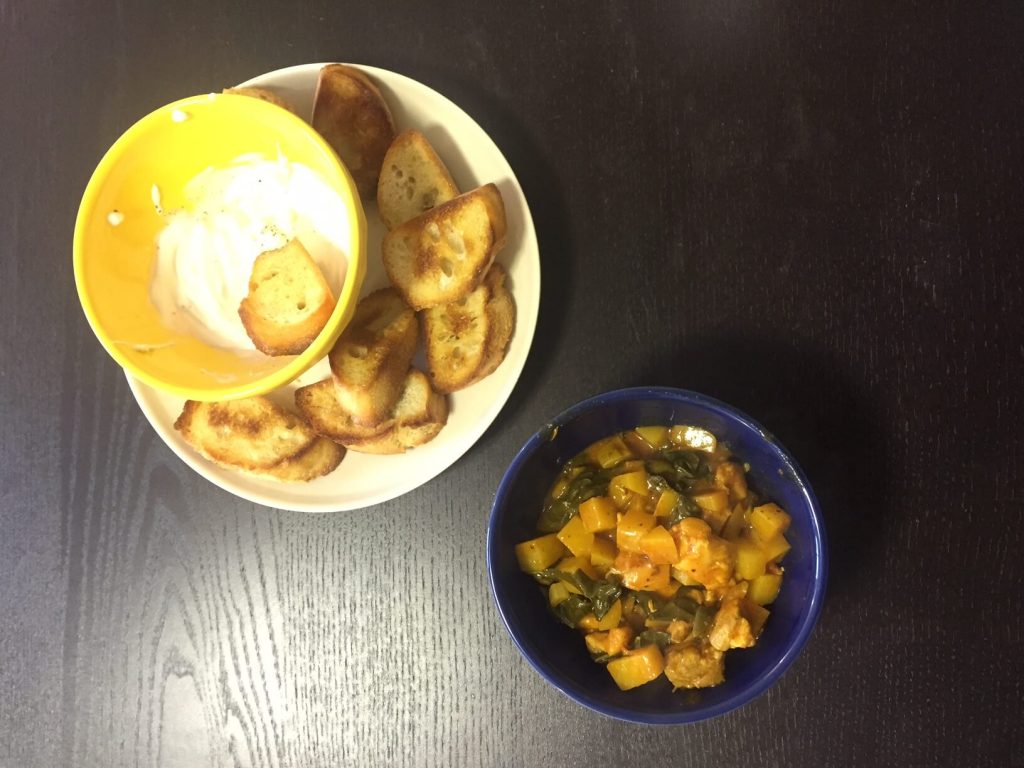 Decent recipe, but the least favorite of the three meals in our box.

I saved this recipe for a blustery day that warranted a steaming bowl of hearty stew. In the end, the stew proved both warming and filling, though definitely our least favorite meal of the week. Though the picture on the recipe card looked fairly soupy, my stew had hardly any of the liquid remaining once the potatoes cooked to the point of tenderness. The flavor that remained was lacking, which I think could have been enhanced by adding a broth rather than just diluting the tomato paste with water. Also, the recipe seemed disproportionately heavy on potatoes, so their flavor overwhelmed the dish. This recipe did, however, make a substantial amount, so we ended up getting two meals each out of it.

Most of the ingredients in this dish are relatively healthy, but for the carb-conscious, the baguette and potatoes don’t do any favors. One medium Yukon gold potato has 26 g of carbohydrates, while the average 6-inch baguette has around 80 g. I’m okay with carbs from natural sources, but white bread wary, I avoided the baguette toasts and still felt plenty full. The Swiss Chard in this dish definitely takes the nutritional gold star. One cup has over 600{2646a176311491570739a13dd319592155ac9cdba4632368aea58c38c45c78aa} of the recommended daily vitamin K, as well as high levels of vitamin A, vitamin C, and magnesium.

The recipe suggests 40 to 50 minutes total prep and cooking time, but I clocked in at well over an hour. There was quite a bit of tedious prep work that went into this meal: washing and drying the produce, dicing the potatoes, chopping the chard, mincing the garlic, cubing the chicken, etc. The two things that really irked me were having to pit the 5 olives they sent (why couldn’t they just send pre-pitted ones) and then the instructions to rub down the cut sides of each baguette toast with a piece of garlic. Our kitchen was a complete disaster when we finished cooking and I was too worn out to clean it.